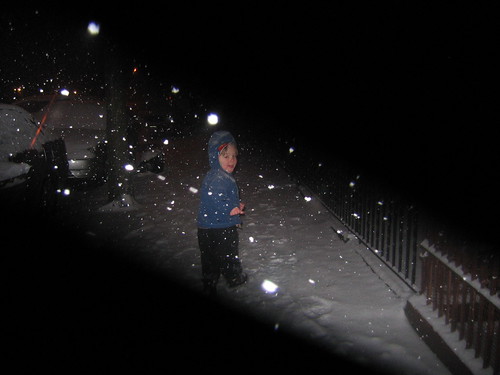 It’s rare that Michael and I get to pick up Callum from day care together. Usually, we play tag-team while one or another of us works late or goes grocery shopping for essentials. But Tuesday night, we met on the train platform at West 4th Street so we could emerge from the subway in Brooklyn as a unit. Why the uncharacteristic togetherness? It was snowing. Yes, we’ve had a few flurries this year, but nothing resembling the picture-postcard snow underfoot that comes to mind when you think snow.

Tuesday was different — it was real substantial snow that crunches with every step — and we were both eager to see Callum’s reaction to the spectacle. After all, we’d dragged him away from sunny California to this big, mostly-frozen city, where he couldn’t go outside without multiple layers. He found it generally unpleasant, but this winter thing, we promised him, had an upside — snow! We talked of snowmen and sledding, but I’m sure he was beginning to doubt our veracity. He’d seen nothing of the sort, and we’ve been here since mid-December.

After we trudged together, smiling with anticipation, we arrived at the day care and began to coax Callum outside. (Promises of snow didn’t mean much to him.) But when we finally got him out into the falling snow, he found plenty to keep him occupied. He felt the crispness of the snow underfoot; he gave snowball-making a shot; he kicked up loose snow. When we got home, Michael took him out on our newly-purchased thrift-store sled. (Due to global warming, this might be our one big chance this winter.) What was most exciting for us parents was the look of wonder in his eye as he experienced this new weather sensation. “Raining?” he kept saying. “No, honey, snowing,” we said.

Note: our camera shutter seems to have not opened completely, so our pictures are kind of screwed up.