You are here: Home / Like Family / My Friend Tigger 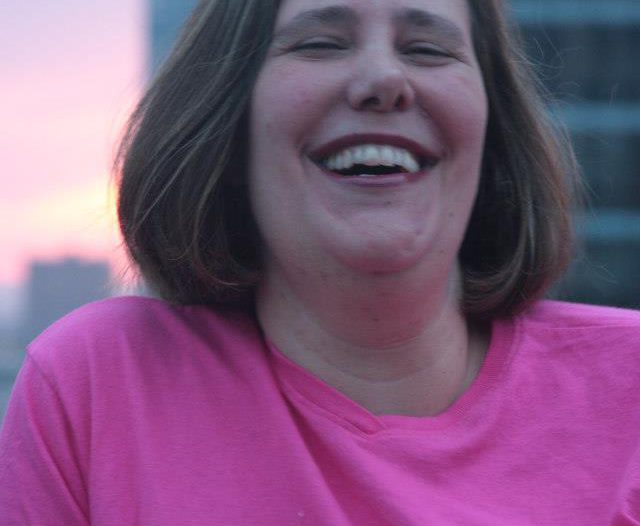 I remember her crossing the finish line at the New York Triathlon in Harriman State Park in 2001, struggling and smiling — she’d made it!

We’d spent countless hours training together for the race, bonding over our less-than-athletic physiques and our determination. But we both crossed the finish line triumphantly.

I remember us going dress shopping before Y2K, then dancing and celebrating in a private venue off of Times Square as the turn of the century approached — we were so lucky! We slipped out at nearly-midnight to watch the ball drop — then cheer and hug —  in the frigid outdoor temperatures, still wearing our fancy gowns.

She introduced me to so many wonderful people, even the realtor who helped us find our house here in Texas. And, somehow, it wasn’t a surprise that she knew a real estate agent in Texas, because Jodie “Tigger” Kahn knew everybody.

We had a lot in common, so, when I returned the favor by introducing her to some of my favorite groups — the Hash House Harriers and the Riverdogs  — she understood the appeal immediately and made fast friends.

We worked in the same industry and, early in our friendship, she gave me anonymous tips that led to breaking news stories. I can still hear her giggling as she shared something that she was particularly pleased about — she had such an appetite for and appreciation of life.

This week, my friend Jodie, known to so many as Tigger, passed away after fighting breast cancer for a little over two years. With her typical foresight, she set up a Facebook group for her “chosen family,” where we could keep up to date and send love and support.

Jodie was an organizer, a connector and a do-er. With some folks who pass at her youthful age (43), you might lament that she’d lived so little of her expected life. But Jodie, she truly lived every moment with gusto — there was nothing to regret.

There are so many things to admire about her, but I especially admire the way she handled her illness. There’s the stereotypical image of the brave cancer fighter, and I don’t want to tread any of those well-worn paths with this narrative. Jodie was just Jodie — brave and fearless in her entire life, not just in her cancer-fighting one.

I last saw her in 2013. She reached out to me via Facebook after seeing from my updates that I was in town — in NYC. I tend not to do much other than work when I’m in town for a conference — the events themselves can be so draining. So, it took a few exchanges of Facebook messages, but she finally told me that she’d been diagnosed with breast cancer. Shocked by the news, up I went to the Upper West Side to her apartment, where we spent a few hours catching up.

Looking back, though I’m sure she wanted to see me, I feel like her real purpose was to allow me to see her — in case it was the last time, which did turn out to be the case. It was then, after I asked, that she added me to her “secret” Facebook support group, which she was reluctant to ask people whether they’d like to join — she worried they’d feel pressured if she was the one to ask. In these gestures she showed the depth of her thoughtfulness.

She certainly didn’t need to add anyone to the group against their wishes. Looking at the group now, I see it has 395 members! She made so many friends at events like Burning Man, Flipside and Figment — places where she could be herself entirely and express her creative exuberance.

While Jodie never talked about dying, it was obvious (to me, at least) that she was resolved to live every moment to the fullest with the best quality of life possible. She wrote about her decision to end treatment and receive hospice care at the beginning of July:

While this may sound “bad” and “scary”, it is actually the right decision. By ending treatment, it allows me access to a lot of resources I don’t have while in treatment.

Hospice provides many services but most importantly it gives me a team of people focused on my quality of life. My team includes a pain management team to minimize the pain, a nurse who comes weekly to check on me, get my any prescriptions or supplies, a social worker, counselor, and even a home health aide to help around the house.

By deciding to officially end treatment, I now have a professional team to help me get through each day and help me to manage pain so it is tolerable.

Pragmatically, and without self-pity (though I wouldn’t fault her if she felt that and anger and more!), she comforts her friends and assures them she’s confident in her “right decision” to make the best of each and every day remaining to her.

I’m unbelievably sad that bouncy Tigger is no longer with us, but I know she did it her way and is a model for the rest of us as we face the inevitable. And let’s not wait until we’re diagnosed with cancer or some other unspeakable disease before we follow her lead. I’ll leave you with a public service message from the Tigger herself: