You are here: Home / Events / The Festive Season Update: 2021 Edition 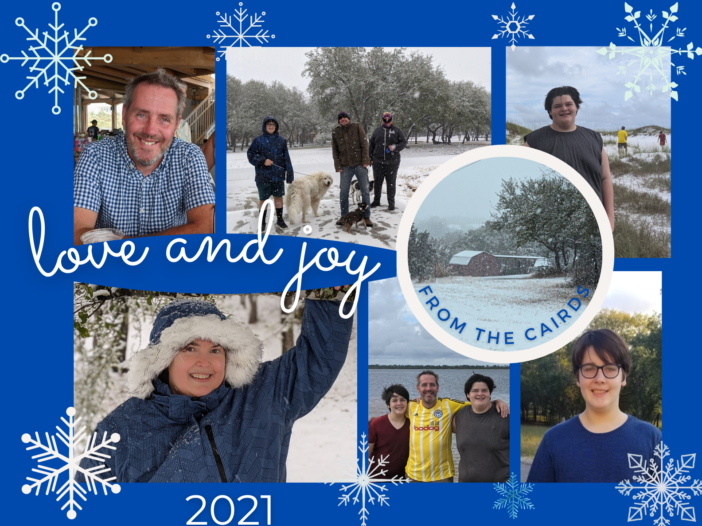 Saving this spot for an update on what’s been happening around the Caird Creek Wildlife Sanctuary over the past year or two, since for some reason (read: COVID) we haven’t been traveling to visit friends and family quite as much as we have in years past.

I’ll start with myself…

The pandemic has seen me pick up all kinds of new hobbies, from painting to birdwatching to quilting to native plants. This last passion will stand the test of time, I’m sure, as I’ve always been fond of the “don’t need to water” aspect of landscaping with native plants. Since we’ve lived in Central Texas, I’ve also grown fond of the “attracts wildlife” aspect.

As part of all this, I joined the Native Plant Society of Texas and have been learning about landscaping with natives. I also created a video that I entered into their annual contest and — get this — I actually won. I made a site to go along with the video (as you do), so you can see it there. It’s been fun and I’ve learned a lot.

Michael has been crazy busy working at our family business, The Knitting Mill. This year brought an especially exciting development — the beginnings of our own factory. (We’ve been renting up until now.) Michael located a piece of land just over 3 acres in area and a stone’s throw from home, and we closed on it in September. Next step: building! We’re both really looking forward to moving everything into the new facility and getting to work.

Michael continues to play soccer with friends when he can make the time, and when he’s not recovering from injuries sustained in his last match.

Callum is a junior in high school this year. (Where has the time gone?) He’s now taller than both of his parents and wears a size 12 shoe. He’s been growing out his hair and trying new hairstyles this year, in addition to developing his own personal style with clothing and jewelry.

So far, Rory is only taller than one of us — me! I knew it was coming, but it somehow still took me by surprise. He is in 8th grade this year, preparing for next year in high school. Rory has been enjoying collecting Beyblades from Japan this year, which he uses to engage his father in Beyblade battles.

The rest of the sanctuary dwellers

Right now, our pets include: